Why Are Wedding Gowns White? Contrary to popular belief, brides did not start wearing white as a symbol of purity. Just as Princess Catherine ushered in a new era of wedding gowns with sleeves when she tied the knot, the white bridal gown trend was inspired by a royal wedding. Queen Victoria wore a pure white gown when she married (which was in fact breaking with royal custom!) and brides of the new middle class were inspired by her as images started to circulate around the world. Before that, royal brides typically wore gold dresses and average brides simply wore their best dress. To have a one time only dress created in a color as hard to keep clean as white was a huge luxury at the time. 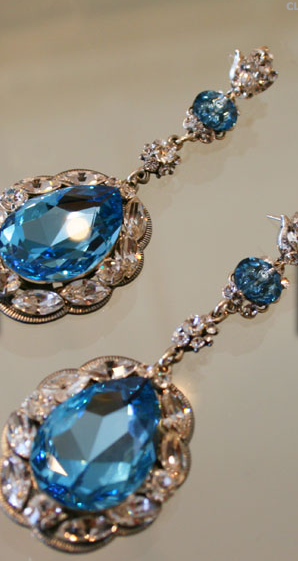 Why Do Brides Carry Something Old, New, Borrowed, and Blue? Each of the items represents a wish for the bride and her marriage. The old stands for the connection to her family and her past. The new, of course, represents the new marriage. Borrowed is an interesting one: the bride is supposed to borrow an item from a happily married woman in hopes that she can also “borrow” some of her good fortune in marriage. And blue is simple: the color has symbolized fidelity since ancient times. The nice thing is that within those customs, the bride can wear anything she wants, from a pair of blue crystal earrings to a borrowed family veil.

Why Do Brides Wear Veils? There are numerous ancient religious and cultural traditions associated with veiling around the world. In ancient times, the veil was supposed to help protect a bride from evil spirits. Another commonly cited reason dates back to the Biblical story of Jacob being tricked into marrying Leah instead of her sister Rachel, thanks to a heavy veil concealing her face. That might well explain the custom of lifting the blusher veil at the altar during modern ceremonies: best to check and make sure you are marrying the right woman! Since the late 18th Century, veiling has also implied modesty and purity, which is why wedding tradition reserves wearing veils for first time brides. Traditionally, women also covered their heads upon entering a church, which is another reason for a bride to be veiled. These days, most women consider their veil to be more of a fashion accessory than anything else, although some religions require them (such as Orthodox Judaism) and others usually expect them (Catholicism). If the bride elects not to wear a veil, it is nice to have at least some pretty ornament or headpiece in her hair.

A flurry of rose petals is a lovely alternative to a shower of rice. Image via Pinterest.

Why Did Guests Used to Throw Rice At the Newlyweds (and Why Don’t They Anymore?)? Tossing rice at the newlyweds was a fertility rite. By showering them with rice, guests were showering them with wishes for a fruitful marriage with many children. In fact, it was even said that the couple would have one child for every grain of rice that stuck in the bride’s hair! The practice has been banned in most places because the rice turned out to be harmful to birds. It has evolved to include tossing of all sorts of things, such as birdseed or rose petals. Other couples skip the tossing aspect altogether and invite their friends and family to wave sparklers or streamers to celebrate their union. Even though the original meaning behind the custom may have been lost, it is still great fun to be showered by good wishes as you exit your wedding ceremony.